For more than five decades the Lily Pond was a popular water feature in Mooney Grove Park. Due to the increasing cost of repair and maintenance over time, the Lily Pond is been non-functional for the past 15 years. To avoid demolition and to honor the history of the Lily Pond, the County is seeking donations from the community to help repair and restore the Lily Pond.

Donations to the Homeless Fund will help supply toiletries, clothing, identification card/application fees, furnishings, or cooking utensils/appliances, or may fund expenses like a utility bill or car repair for those experiencing, at risk for, or exiting homelessness.

The Kings/Tulare Area Agency on Aging helps provide programs and activities for local senior citizens, from arts and crafts to Medicare counseling, line dancing to home-delivered meals. Your donations to the Area Agency on Aging will help us continue to provide a wide range of services and activities to encourage older Americans to remain healthy, active, and involved in the community.

SPTF envisions a county without suicide and aims to accomplish this by implementing a full range of strategies, starting from prevention and early intervention. Your donations to the SPTF will help increase prevention and early intervention services, and help our community members better understand and recognize the signs and symptoms of suicide risk.

Contributing toward the support of our local veterans through the VSO General Fund is a great opportunity for the members of the community to give back and thank veterans for their services.

The funds donated to the Human Services At-Risk Youth fund benefit youth who are participating in an employment program and working to make the transition to adulthood and self-sufficiency. This program helps youth in need of emergency monies for necessities such as transportation, work apparel, utilities, medical, dental, and prescription expenses.

Visalia native Brooke Crain, two-time Olympian athlete (2012 and 2016 Summer Olympics) in BMX racing, wants to pay it forward and share what she has learned and experienced, on two significant levels. Competing in BMX racing on the Olympic level has given her a vast amount of expertise that she wants to share with aspiring racers. And after losing her father, Todd Crain, to suicide last year and being helped by her local Tulare County Suicide Prevention Task Force and LOSS Team, Brooke wants others to know that they’re not alone, and that help is out there. With her dream to compete in BMX racing on the Olympic level realized, she’s looking forward to her next dream: becoming a public speaker, discussing suicide awareness via early intervention, education, and postvention.

“I just want others who have gone through similar experiences involving suicide to know that talking about it really helps, and it’s important to reach out; the resources are there,” Brooke says. “We’re all going through stuff, and my hope is that by speaking out about my own experience, sharing my story, I can encourage others to break their silence and get the help they need, like I did.”

To raise awareness about suicide prevention and battle the accompanying stigma, Brooke is hosting a BMX Racing Clinic as a fundraiser event on April 10 in Bakersfield, California. Open to all ages, the clinic will give riders a chance to learn tips and techniques from herself and fellow BMX racers Rachel Jones, Nic Long, and Jordan Miranda.

The event runs from 1 to 5 p.m., at the Metro BMX (located in the Sam Lynn Ballpark, 3805 Chester Avenue, Bakersfield 93301). Registration begins at 12:30 p.m., and riders can sign up onsite. The sign-up fee is $100 per rider, and all proceeds from the racing clinic will be donated to local, nonprofit suicide awareness organizations in Bakersfield, Visalia, and San Diego.

After the event, free pizza and giveaways from Vans and Haro will be distributed to all riders who participated.

Additionally, an online auction is being held via Facebook, which will include the jerseys belonging to Brooke and the renowned racers who will be coaches at the event, as well as the jerseys of former Olympians, Olympic medalists, professional BMX racers who are former world champions, national champions, and Olympic hopefuls. The auction is LIVE NOW. Get your bid in at: Suicide Awareness Clinic Online Auction. The auction ends on April 11 at 10 p.m. Good luck!

Finally, if you are not a rider but would like to support Brooke’s suicide awareness efforts, Brooke is also sponsoring a GoFundMe fundraiser. Follow this link to donate:  Suicide Awareness. 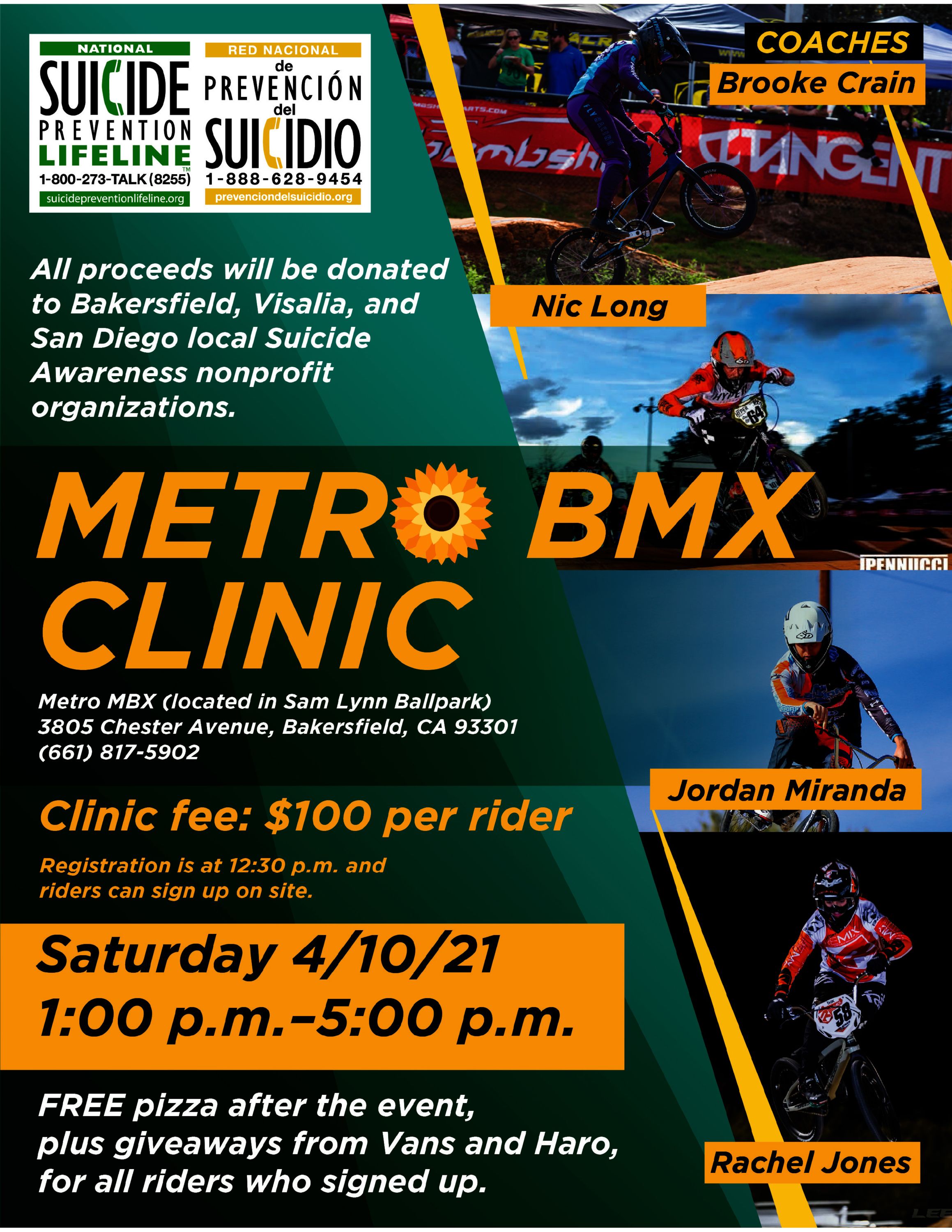